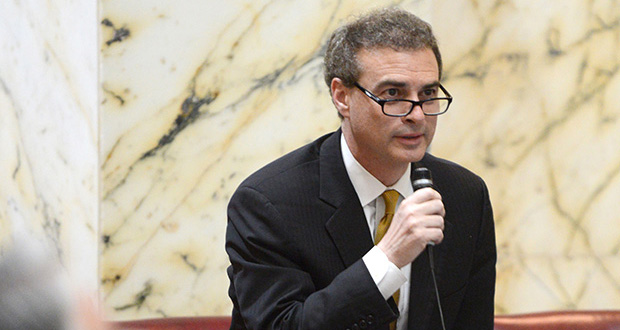 Senate Finance Committee Vice-Chair Brian J. Feldman (D-Montgomery) has filed legislation to legalize adult-use cannabis and pump funding into communities that have been adversely impacted by its current criminalization.

In a phone interview with Maryland Matters, Feldman described the bill plainly: “It’s a cannabis legalization bill that would tax and regulate cannabis sales,” he said.

But it does a lot more than decriminalize: several measures in the bill look to address socio-economic and criminal justice inequities experienced in Black and Brown communities.

Under Feldman’s legislation, businesses in the state’s existing medical cannabis industry would pay fees into a social equity fund to be used for low-interest loans for minority business owners to enter the industry.

Additionally, a portion of the tax revenue from the newly legalized field would be fed into a Community Reinvestment and Repair Fund, which would provide housing assistance, scholarship aid, re-entry programs and other services in communities that have been adversely impacted by mass incarceration and racism relating to the state’s current criminalization laws.

The Community Reinvestment and Repair Fund would also aid people formerly incarcerated for petty cannabis charges in applying for expungements.

“There’s no doubt that legalization of adult-use cannabis is a complex issue,” said Ferguson. “We need to make certain that economic benefits are equitably distributed and criminal justice reform is incorporated.”

“Maryland is ready to move forward with this and I look forward to its hearing.”

Feldman said that cannabis is already legalized for adult-use in 15 states and Washington, D.C., and that four more states approved ballot initiatives to decriminalize it on Nov. 3.

He asserted that his bill, which he warned will have amendments, will put Maryland at the top of the list in terms of social equity provisions.

“We’ve looked at best practices from the 15 other states that now are going this route so we have the benefit of looking at a variety of states … and try to come up with a bill that learns a little bit from some of the missteps in the other states,” he said.

‘Whether it’s this year or next year’

A good portion of what is in Feldman’s bill, “90-plus percent,” he said, is accounted for in legislation sponsored by Del. Jazz M. Lewis (D-Prince George’s).

But the bills do have their differences.

Feldman’s bill would decriminalize the possession of under four ounces of cannabis by adults 21-years or older. Under Lewis’ bill, adults 21 and above could legally possess up to two ounces.

There are also some bigger contrasts.

In Lewis’ bill, the sale of cannabis would be subject to a 20% excise tax.

“People are willing to pay a premium for a legal product, but if there’s too big a gap between the illicit product and the legal product they’re going to stay at an illicit market,” which would pull money away from the funds accounted for in the bill, Feldman said.

Lewis told Maryland Matters that it’s clear that larger medical cannabis companies doing business in the state will transition over to the legalized recreational industry and succeed.

“But what we’ve also learned is that, if we’re going to have an industry that is fair and equitable, then a lot of the independent dispensaries and others should be able to succeed,” he said. “And the challenge they’re currently having is that they can’t get product from a lot of the cultivators.”

Under Lewis’ bill, anyone who has a license from a regulator can contract with dispensaries.

This means that smaller, minority and women-owned businesses would have a steady stream of product “so they don’t get squeezed by the vertically aligned operators ― who I don’t have anything against,” Lewis explained, “But I don’t want to pass a legalization bill that has all these equity provisions just for three years down the line we find out that all the minority and women-owned operators no longer exist ― they’ve been squeezed out of the market.”

Feldman said that the “biggest challenge” around morphing the two lawmakers’ bills into one is “the nature of the [2021] session.”

“Right now the ability to sit around a conference room personally and negotiate differences, you know, we have to get on the Zoom calls so there is some real practical challenges, in all candor,” Feldman explained. “But I think that what we’re doing now is fleshing out all the issues and … I’m very confident that we will pass a bill like this this term, whether it’s this year or next year.”

“I think Senator Feldman’s heart’s in the right place, and we’re still talking … and I’m hopeful that we will end up having a unity they’ll very soon that everyone can get behind,” Lewis said.